All articles tagged with "2 Mistresses"

Mistresses crush guy to make him fear them

Mistress Krush and goddess Serena felt that this guy was not afraid of them and they wanted it to change. He did not do things the way they wanted and they put it down to the fact that he did not fear them. So they trampled him and crushed his face and entire body while choking him with their feet. He learned to fear them and they achieved what they wanted.

Mistress Marina and her friend mistress Olga were chilling at their beach hotel when they saw this guy walk up to them and he wanted to hit on them. They could tell his intentions but what he did not know was that they had theirs. And theirs was to turn him on and have fun at his expense. He was clueless and they had fun ordering him to do things which he did. He licked their feet and shoes and did not know he was being used.

When this guy conned these mistresses, he did not know what problems he had brought upon himself. He thought it would be business as usual but it was far from that. The mistresses punished him using their asses. They had ganged up against him and there was nothing he could do about it. He cried as they used their dirty asses for the punishment but they ignored his cries and went on with the punishment.

Mistresses gang up on player

Mistress Ines and mistress Adele found out that this guy was trying to seduce both of them. He was so confident of himself that he tried to hit on friends thinking he could manipulate them not to tell each other about him. But they did and they punished him for trying to ruin their friendship. They punished him painfully and they did it together. He was trampled and stomped on until he peed himself. 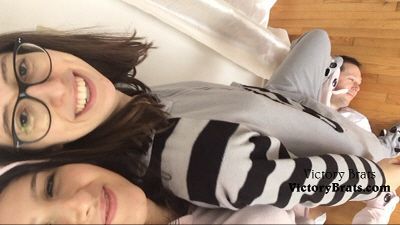 Mistresses torture guy in the nipples

Mistress Gaia and her friend knew that torturing this guy's nipples would make him feel untold pain and also get to cooperate with them. He was not being cooperative with them and they did not like it. He had to learn to do things their way and after he was tied up and his nipples squeezed, he had no choice but to do things as he had been instruced by the mistresses.

This guy was a player but he messed with the wrong girls. He had pleased others and he had gotten them to do crazy things with him but these girls were not cut from the same cloth. They were not going to let him get away with the things he did and that is why they facesat on him and they made sure he paid for being a player. He never played anyone again.

This guy was a common enemy to both mistress Kelly and mistress Sabrina. The mistresses realized they each had beef with him and instead of looking to punish him individually, they chose to do it together. They laid a trap for him and when they caught him, the mistresses made him lick their sweaty feet and they also jumped on him and they trampled him as cruelly as they could. He was also their punchbag and had to endure their blows.

Mistresses gang up on elderly loser to have fun

When these mistress met this elderly loser, they did not see a senior citizen. Instead, the mistresses chose to humiliate him for fun. The mistresses saw a guy to humiliate and he had to endure the kind of things they made him do. He was forced to lick their socks as well as other dirty parts of their bodies. The mistresses only let him leave after they were bored and tired.

Princesses use sexy asses as bait to dominate

Princess Adelaide and her friend princess Georgie have gorgeous behinds. And they love to use them to dominate and humiliate guys for fun. Today they lured this guy to their house. The asses were more than enough bait. When he got there, he was turned into a humiliation machine. He was teased and denied before being made to lick and smell their asses as well as the princesses' feet.

Mistress Yas and her room mate had asked this guy to do some work for them but they did not like how slow he did it. The mistresses were angry at him and they punished him for it. He was forced to endure the pain of being trampled and cruelly humiliated by the mistresses who wanted him to finish the work quickly. And after that humiliation, he had no choice.