When mistress Black Diamoond wants to punish a slave severely, she does not like any resistance. She likes to do her thing in peace. Today she tied her slave to a cross and she called her apprentice. She then showed her what to do. They ballbusted the slave and tortured his nipples as well. It was cruel and painful, just as they had planned it. They also had a spare slave in case they needed to continue.

Madame Marissa is a great teacher. That is why she is sought after and it is also why she commands a good fee. Today she was teaching her student madame Madison how to trample a slave. Madame Madison was a good student and they had fun trampling the slave in all kinds of places and in all kinds of ways. The mistresses did not spare the slave's neck and face from the tramples.

Mistresses force con to give back their money

This guy makes a living conning guys. But he had conned the wrong girls this time round. He had always thought he was tough and could withstand anything thrown at her by the people he conned. But he was not prepared for what these girls did. They did not report him to the authorities. They trampled him and tortured him and they did it slowly without any hurry. In the end, he had to give them back their money.

Mistress Cynthia likes everyone in her group being sharp and prepared. She is very competitive and does not like to lose. When this guy caused them to lose points in their current competition, she did not take it well. She punished him to make sure he did not make them lose points in the next round. She crushed and trampled him with help from her guy friend. She even made him lick her shoes and her feet. 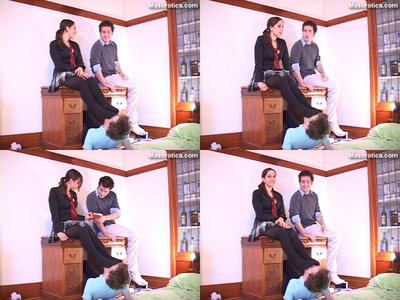 Mistresses Vanessa and Marinka had a score to settle with this guy. They pretended that they wanted to talk about things and when he came, he found they did not care about talking. They had counted their losses and were willing to move on but not before they gave him a piece of their mind. They made him their sweat remover and had him lick their sweaty feet and degraded him.

Lady Nicole and her friend Betty wanted to show their displeasure with their lawyer for not winning their case. They had a lot invested in that case and he went ahead and lost it. They were pissed and their anger found its way to him. They tied a leash on his neck and made him lick the soles of their dirty sneakers before they used the sneakers to crush him with.

Cruel mistresses punish guy for messing with them

This guy pissed off not one but two mistresses. Unfortunately for him, the mistresses he pissed off were friends and they were cruel and sadistic. It was literally his worst day ever. The mistresses plotted to punish and punish him they did. They crushed him on the neck, face and head using high heels. They made him lick their soles and stomped on him without a care in the world, inflicting a lot of pain in the process.

Mistress BlackDiamoond is an unforgiving mistress. When someone especially a slave messes, she has to punish them whether the mistake is small or it is a big one. Today she did not do it alone. She was with her friend mistress Grace and she asked her to join her in punishing her slave. They whipped his bare ass and made sure it was all red and he was screaming in pain.

Madame Madison had tried to explain to her friend about her foot worship fetish and she did not understand it. So she called her friend Virginia and showed her practically what she meant. She called her slave and she enjoyed making him lick her feet and suck her toes. She also made him do the same to her friend. Virginia not only understood it, but she loved it and enjoyed it as well.

These mistresses are brutal. They are cruel. They are sadistic. They were punishing this snitch for revealing a secret and they did not go easy on him. They undressed him and tied him up. They used their high heels to trample his cock and his balls. But that was not enough for them. They kicked him hard in the balls and on his dick so as to make him feel more pain.