Mistresses torture loser for messing with them

This mistress was angry that her boyfriend had forgotten about their anniversary. He had instead gone to hang out with his friends. She was pissed and waited for him to come back home. When he did, she was with her friend and they both humiliated him by trampling him. They did not even give him time to understand what was going on till they were done humiliating him. He never forgot it again. 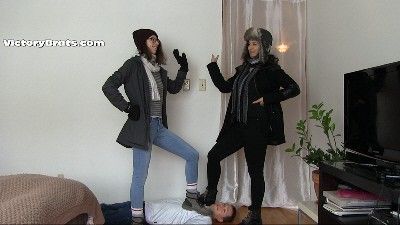 Mistresses humiliate guy for mistaking them for escorts

Mistress BlackDiamoond and her friend were hanging out today when this guy thought they were escorts and he tried to pick them up for the night. The smoking mistresses were not impressed and tried to ignore him. He thought they were playing hard to get so he tried harder and offered more money. The pissed mistresses took him to their house where they humiliated him and still took his money.

These three girls love to do a lot of things together. And today they wanted to try something else. They wanted to try trampling a guy together at the same time. They wanted to do it to someone who deserved it as they were sure it was going to be painful. They did not have to wait for long as this guy was rude to the elderly couple in their building and they took the chance to trample him and teach him a lesson too.

Mistresses humiliate guy for being rude

Mistress Jane and her friend Queen Hanna did not like how this guy approached them. He was rude and he treated them like hookers. They were pissed at it and they had to show him their true colors. The mistresses wanted to humiliate and torture him so they did it. They facesat on him and nearly choked him as they did. He begged for mercy but they ignored him and went on doing what they wanted.

Mistress Gaia and her friend are naughty girls. They like to do crazy things and today they chose to humiliate this loser for fun. They wanted to financially dominate him and that is what they ended up doing. The mistresses put on a show for him. They licked lollipops and made out as he watched. He was turned and they financially humiliated him before they spat on him and slapped him.

Mistresses enjoy torturing guy to get their money back

When these mistresses realized that this loser was not going to give them back their money, they had to come up with a different way to do it. The mistresses chose to lure him to their house. He expected to have fun but he ended up watching the mistresses drink wine as they made fun of him and when they were done, they humiliated him using their high heels as well as their stinky feet.

These mistresses were broke. They went online to search for a way to make some good money. They came across a mistress who wanted her slave to be punished and was willing to pay handsomely for that. The mistresses called her up and they got hired. They had a great time trampling him with their high heels as well as with their bare feet despite the fact that they had never done it before.

Mistresses trample slave's head to pump sense into him

Lady Betty and lady Bertie realized that this guy was not understanding what they were telling him and they had run out of ways to make him understand the message they wanted to pass across. So the mistresses used their feet and their sneakers to crush his face and his head. They wanted to drum some sense into his head. When they were done with him, he had miraculously gained a new understanding of what they were telling him.

Lady Alice and her friend love big boots. They were going out but before they did, they made their slave lick their boots to give them an extra shine before they left. But they only wanted him to lick the soles and he had no choice but to do what he had been ordered to do. The slave tried to plead but the mistresses would not even hear him out.